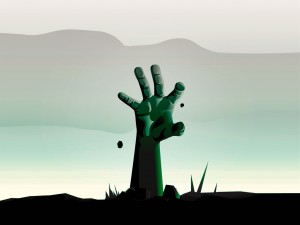 HP. CISCO. DELL. EMC. IBM. Oracle. Think of them as the walking dead.

Oh, sure, they’ll shuffle along for some time. They’ll sell some stuff. They’ll make some money. They’ll command some headlines. They may even do some new things. But as tech giants, they’re dead.

This was driven home in wonderfully complete fashion this past Wednesday, thanks to a trio of events. If you don’t follow the seemingly uninteresting, enormously lucrative, and, in fact, endlessly fascinating world of enterprise computing—computing that helps run big businesses—you may have missed them all. But they were big news in the enterprise world. And together, they show just how dead those giants really are.

First, Pure Storage, a Silicon Valley startup that sells a new kind of hardware for storing large amounts of digital data, made its Wall Street debut. Later in the day, The Wall Street Journal reported that big-name computer tech company Dell was in talks to buy EMC, a storage outfit that’s much older and much larger than Pure Storage (the deal was announced this morning). And during an event in Las Vegas, Amazon introduced a sweeping collection of new cloud computing services that let you juggle vast amounts of data without setting up your own hardware.

That may seem like a lot to wrap your head around, but the story is really quite simple. For decades, if you were building a business and you needed to store lots o’ data, EMC was your main option. You gave the company lots o’ money, and it gave you some hefty machines packed with hard disks and some software for storing data on those hard disks. The trick was that you could only get that software from EMC. So, anytime you wanted to store more data, you gave EMC more money. This made the company very rich.